The Victorian Regional Artist Residency is an annual opportunity from Chunky Move and Warrnambool Art Gallery for individual artists or collectives residing in Victoria who have a minimum of 3 years professional experience. The aims of the residency are: to engage people with contemporary art and performance across Warrnambool and Melbourne; to propose new ways of thinking about what movement is and the role of movement artists in society; to connect artists and their practice and with the Warrnambool community. Artists are supported with a $4500 artist fee, $500 materials budget, technical support and in-kind studio space for the residency period.

Daniel Newell is a dancer, maker, performance artist, educator and graduate of the Victorian College of the Arts. Cat-walking the fine-eyeliner of the pop cultural and political, Daniel’s work can be defined as creatively chaotic and cathartic, often outing itself as homo-erratic. Having performed in over twenty countries, highlights include working with ABC’s You Can’t Ask That, Melbourne Festival, Sydney Opera House, Honcho Disko, Dark MOFO, Rafael Bonachela and Kylie Minogue.

Through dance and experimental performance art, Daniel has created solid prominence within ‘so-called Australia’s’ queer ecology with character DANDROGYNY. ‘Drodge’ at their core, playfully calls us to notice the performed nature of hyper masculinity and its toxic implications. DANDROGYNY is a proud, defiant, charismatic, subversive party favourite who, with fierce [hi]-visibility leaves a neon trial of desire on every dance floor.

Daniel is at a midpoint of their time in so-called Australia, having lived their first 18 years on Gunditjmara Land, Warrnambool, and the last 18 years on Wurundjeri country in Melbourne. Their residency will explore this midpoint, engaging with their body through stories of childhood, sharing with local artists and leaning into local sites like Tower Hill, The Dirty Angel, Lake Pertrobe and Flagstaff Hill. Throughout the residency, Daniel will explore the rural landscape of their childhood, celebrating their queerness and their contemporary art practise.

Atlanta Eke lives and works in Melbourne. She is a dancer and choreographer concerned with dissolving pre-existing perceptions and expectations by changing fixed representations of the body through movement. She works with and beyond the limitations of the body, in collaboration with fellow dancers, artists and arts administrators in variety of contexts. Her work with dance is currently project specific, within each project a question for the next arises, along side an effort to deconstruct the modes of production and presentation of the previous work. Having recently had opportunities to present work in exhibition spaces, she is interested in how an exhibition space and timeframe can be utilized as a resource for developing dance.

Atlanta will spend her residency developing a new work with dance and video. With the support of Creative New Zealand (CNZ), she will work with video artists Hana Miller and Jacob Perkins of RDYSTDY to question: Where is the surface of a dance? How does the dissonance between the seeing and feeling of the physical body program new pathways?

Experimenting with her interior and exterior interfaces, she will explore where thresholds begin and end within and beyond the limitations of the dancing body.

For the inaugural WAG X Chunky Move Victoria Regional Artist Residency, Chunky Move were honoured to host esteemed Australian choreographer and performing artist Rosalind Crisp. Ros, who was selected by Chunky Move after applying through an open EOI process, undertook a two week residency in both Warrnambool and Melbourne. Ros adapted her solo dance lecture DIRtywork to the south-west Victorian context and shared this research during public showings at WAG and Chunky Move.

While in residence at WAG, Ros engaged with local artists and communities in Warrnambool visiting sites of environmental damage in the south-west. She drew on processes and practices she developed in East Gippsland’s forests and through regional, national and international residencies.

Rosalind Crisp was born in Omeo, East Gippsland. She trained at the Victorian Ballet School, Melbourne and the European Dance Development Centre, the Netherlands. In 1996 she established the Omeo Dance studio in Sydney, which for ten years was the home of experimental dance research in Sydney.

In 2002 she was invited to Paris by Michel Caserta, director of the Biennale du Val-de-Marne. Carolyn Carlson saw her performance and invited her to become the first Associate Artist of the Atelier de Paris – Carolyn Carlson. The Atelier managed and toured Rosalind Crisp / Omeo Dance for ten years. Since 2003, Rosalind Crisp / Omeo Dance has created 16 new works, touring to over 100 festivals in Australia and internationally.

In 2015 the French Ministry of Culture awarded Rosalind a Chevalier de l’Ordre des Arts et Lettres, a distinction bestowed on only a handful of Australians, including Robyn Archer and Cate Blanchett. Her other awards include a NSW Women & Arts Fellowship, an Australian Mo award for best female performer and an honorary fellowship of the University of Melbourne-VCA.

The foundation of her work is her ongoing studio research practice and her long-term collaborations with, amongst others: Céline Debyser, Helen Herbertson, Andrew Morrish, Bo Wiget, Isabelle Ginot and Susan Leigh Foster. Rosalind returned to live in East Gippsland in 2014. She currently works between East Gippsland and Europe.

“The WAG X Chunky Move residency has been an extremely valuable time for me to continue the exploration of a danced lecture dealing with the ecological peril Australia faces and how dance might respond to this. I met and exchanged with a number of local artists and community members in conversations, open studio practices, planned showings and spontaneous exchanges. I alternated dancing in the studio/gallery with dancing at local sites of environmental significance and undertook research into local environmental issues. I deepened development of processes for dancing that invite a responsiveness to the place I am in, both at Warrnambool Art Gallery and at Chunky Move studios. I investigated historical facts about the materials of the respective buildings and the histories of the surrounding sites that have endured significant ecological rupture, fragmentation or restoration since colonisation. This residency has nudged into existence new thoughts and ideas in my eco-dance practice.” 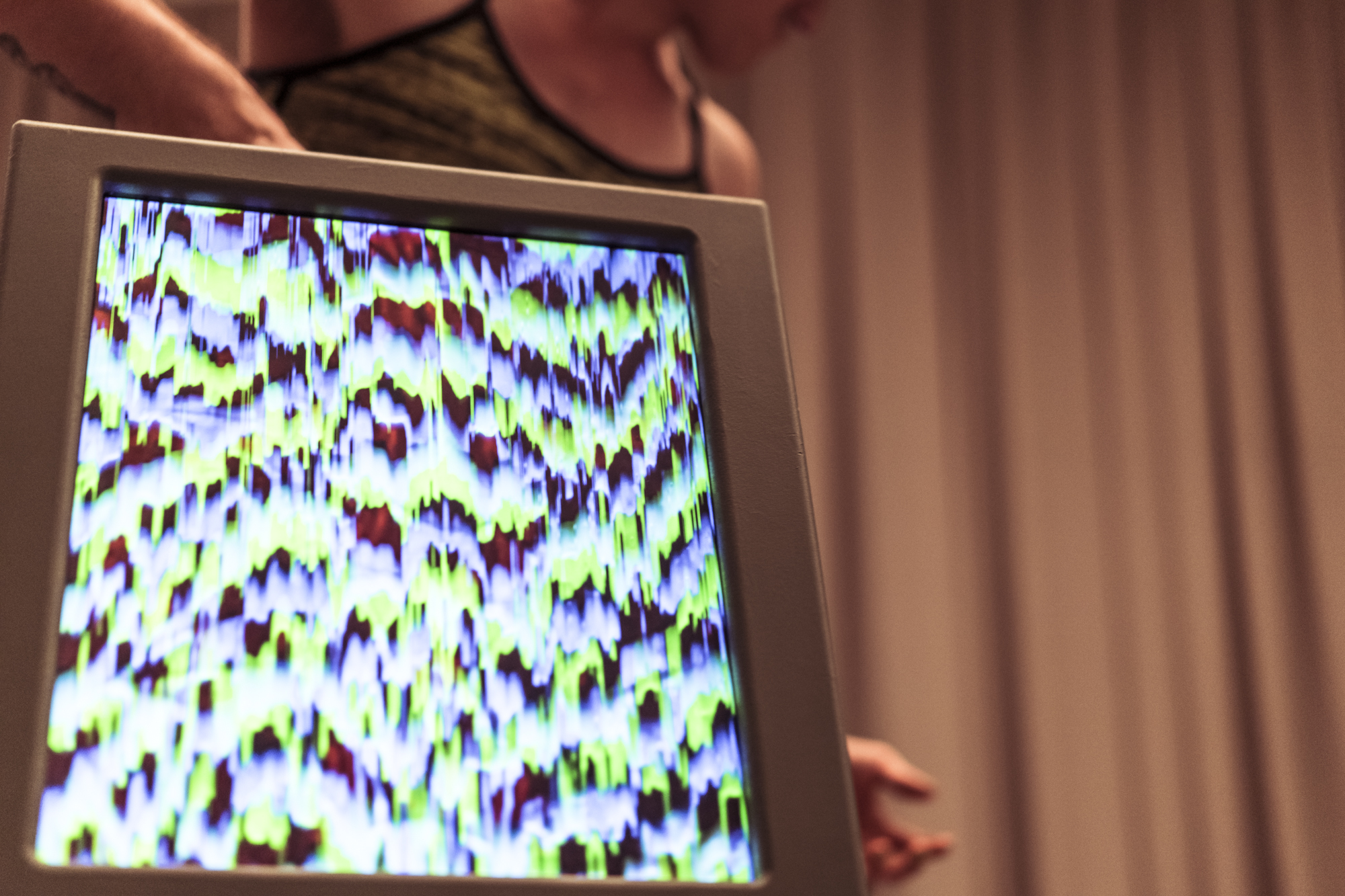 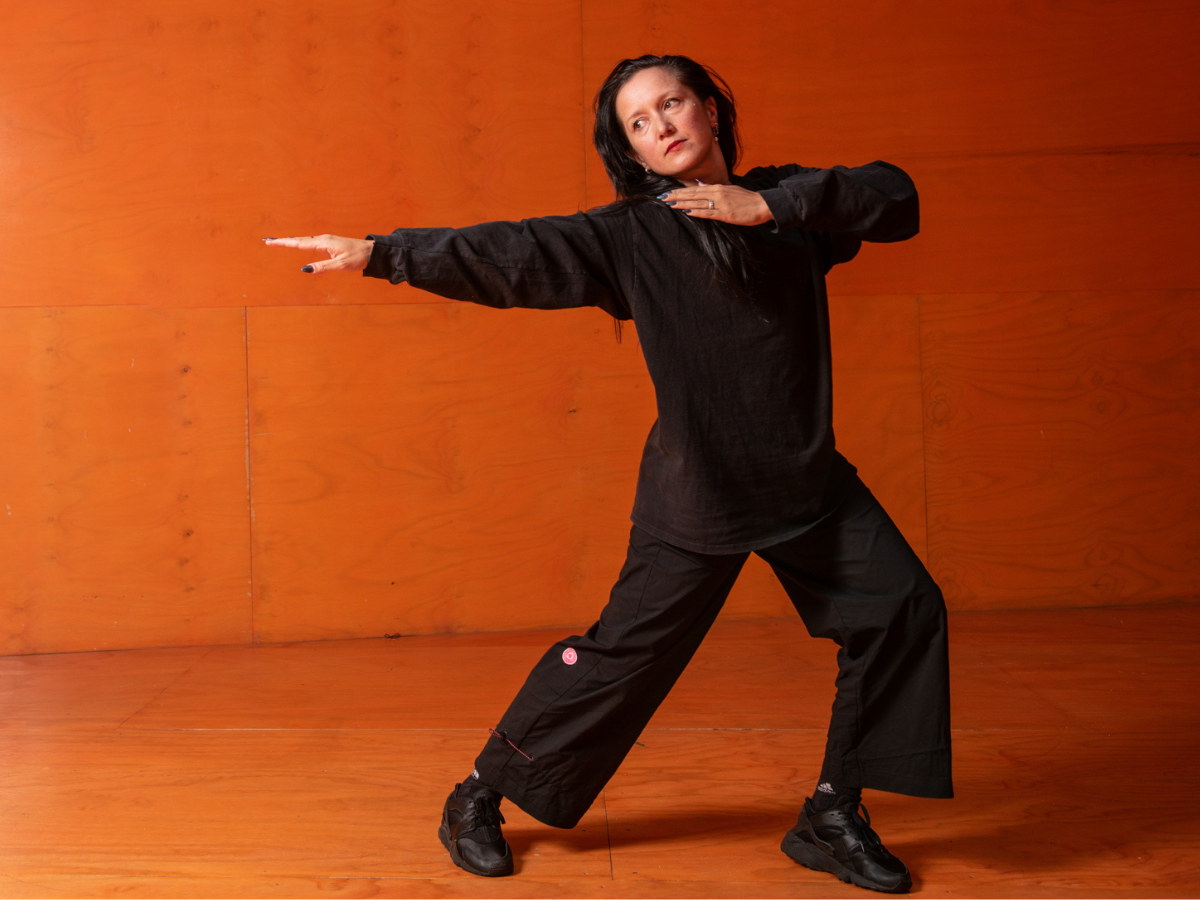 Chunky Move is located on the unceded lands of the Boon Wurrung and Wurundjeri people of the Kulin Nations. We respectfully acknowledge the significant contributions of Australia’s First Peoples, and are committed to supporting the continuity of culture and relationship to this land.

This website uses motion, video and user controlled movement.
If your prefer an interface with less distractions, you can select options in the bottom left of the site at all times.